When my husband Dan and I first decided to move in together, we had been enduring a 5 hour trek back and forth from Drayton Valley to Lethbridge, AB. As beautiful as I still and will always find the mountains and the fields that seem to go on forever, I was sick of that drive. I couldn’t have been more excited to pack up my little apartment in the city and head out to the big wide open country!

Our home sits on 160 acres, one mile off the pavement and about three from the river. I arrived in mid-May of 2015, jobless and ready for the summer! I think the coop talk was the beginnings of my husbands plan to keep me busy for the summer until I had had a chance to settle in and find a job. Was he ever in for a challenge.

My Mom and I are avid “Pinners”, so we took to the internet with a force, scouring for hours coop designs and pictures. When I finally settled on one I found to be quite adorable, I printed off a picture and handed it to Dan. This is what I wanted us to build.

When we look back on this experience, we like to refer to it as our “Team Building” exercise. It was a great way to get to know each other…and our patience levels. In the end, we ended up with one pretty good squabble, one fat lip and one hell of a chicken coop (in my biased opinion).

This is how the squabble entailed. We’re cleaning up post coop construction one evening when it begins to rain, with somewhat of a force. Location of coop buliding area has forced us to witness the fact that the garage rain gutters are not performing peak rain capture and disposal. Dan climbs on the roof to inspect and discovers that in fact, they are clogged. He proceeds to yell down at me that he requires ” a poky thing”. That’s right. A poky thing. I’m thinking screwdriver. Where is that darn screwdriver. As I frantically search the garage for said “poky thing” I can hear him muttering his profanities on the garage roof. “I just need a damn poky thing. Just any f(#@%^& pointy thing you can find!” I do not stand for being blasted with profanities. I found a poky thing, a stick lying in the ground beside the garage, and continued to send it flying past his head over the roof. End story.

As for the fat lip, perhaps that was my karma for the stick tossing. I was the designated board holder, as I am not yet to be trusted with the saws. Of course a board would jump, only to come flying up and hit me in the mouth. I know Dan felt bad when I asked if I was bleeding even though I could clearly taste the blood in my mouth.  At least I look cute with a fat lip!

We started from the ground and worked our way up, picking away here and there during the evenings and giving it our all on the weekends. It took us a total of 3 weeks to complete but I could not be happier with how it turned out.

Day 1- I found this pink hard hat hiding in the shed. Obviously a pink hard hat means you’re in charge! Frame was laid out and the base was created.

End of Week One- The roof was attached, the coop house built and of course the dogs thought we were building them a kick-ass dog house!

End of Week 2 – We had the coop house complete along with a lesson in insulation expansion. Doors were attached and nesting boxes built in. Now to paint… 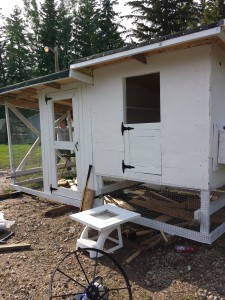 Beginning of Week 3–  Painting was a success, both the coop and wheels we had picked out needed double coats. We were now onto attaching the wire to the enclosure areas. We were so close to being done! 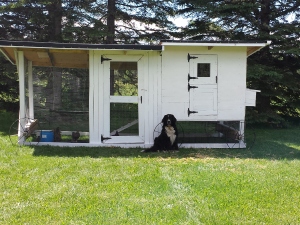 End of Week 3 – Coop Completion – All of our hard work and finally we were finished. We got all the chickens moved in and the girls became our honorary guard dogs.

From a picture on Pinterest, to the real deal. We added our own details of course; the split level roof, a 2 part-coop door for easy access, 8 nesting boxes total inside and of course the wagon wheels. The wagon wheels were my Kijij find after Dan came up with the idea to make the coop mobile and I was not going to end up with some Red Neck creation! They were a perfect finishing touch. Every two days we would move the coop to a fresh patch of grass, keeping our lawn from dying and feeding the chickens at the same time.

All-in-all it was worth any blood, sweat or perhaps tears that had occurred. We now had the coop of my dreams!

Since then, we have made some additions to our backyard flock and with the increase in the number of chickens we found ourselves in need of another

coop. We found an old truck canopy and Dan came up with a plan to turn it into an outdoor run. We then built a custom coop to fit the canopy and of course, it had to be truck shaped! We now refer to the new coop as the Polish Pickup Palace as it houses this years babies of Polish and Maran chickens.

We also created a large outdoor enclosure that measures 20 by 40 feet and is fully enclosed with wire and top netting. This eliminated the need to move the coop and allowed all of our birds to get out and socialize in one setting. It has been a great addition and the chickens love being out on the grass, digging in the dirt and chasing bugs!

5 thoughts on “Our Coop”